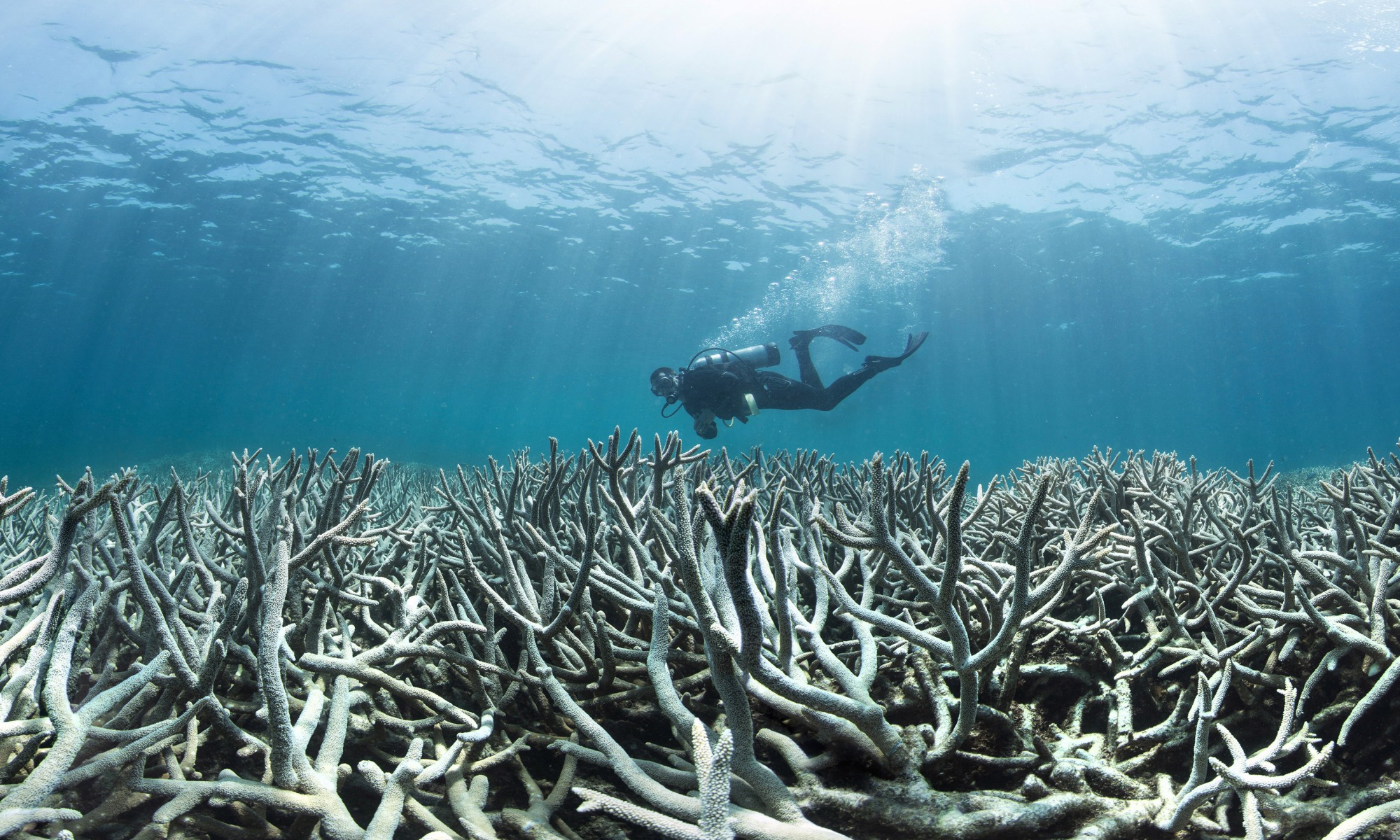 Ocean acidification is one of the most detrimental effects of climate change and has been seen sweeping across hundreds of vital ocean habitats across the world, including the iconic Great Barrier Reef. Recognised as an important negative impact of modern day pollution, it’s something that’s often seen in the media and researched behind scientific gates. But, it’s also a term that comes with complicated dialog, chemistry and terminology…. so what does it really mean?

How does it happen?

As with most implications of climate change, ocean acidification is caused by the increase of Carbon Dioxide (CO2) in our atmosphere resulted from global industrial activities like burning coal. It’s a well know fact that the ocean absorbs CO2 from the atmosphere and has done since forever, but this has always been a slow process, happening over hundreds of years whilst maintaining a healthy balance. Now, with humans producing more CO2 than ever and at a much faster rate than natural cycles, the balance has tipped.

Since the industrial revolution, the ocean has absorbed about a third of all CO2 emissions. Whilst this may look beneficial for atmospheric concentrations, it’s leading to higher rates of negatively impacting chemical reactions within our precious oceans.

To put it more simply, the higher the CO2 concentrations in the atmosphere, the higher the exchange into our oceans and the lower the PH rating. The result is a more acidic environment (hence ‘ocean acidification’) and a lack of vital carbonate minerals.

What are the impacts?

In previous geological time periods of cooling and warming, the acidity of the oceans changed over thousands of years which allowed marine life plenty of time to adapt. Now, with changes happening faster than ever, the oceans species are struggling to keep up.

Marine species dependant on carbonate minerals to survive are being impacted at worrying rates. These include clams, urchins, plankton and even entire coral reef systems. For these species, carbonate minerals absorbed from the surrounding oceans are the building blocks for their skeletons and shells. So with an increasing lack of carbonate minerals available in the water, caused by ocean acidification, their ability to form and grow is becoming heavily limited… if not stopped entirely. In fact, with acidity levels getting higher and higher, species shells and skeletons will even begin to dissolve and corrode

Studies have also shown that non carbonate dependant species may be affected. In these cases, due to chemical changes, species like clown fishes’ abilities to detect predators will be decreased. As well as this, some marine animals sense of smell may be decreased. As with all ecosystems if these species are affected and populations decrease, the entire food web will feel the impacts.

How does the future look?

Unfortunately, unless drastic changes to our current CO2 outputs are made, the future is not bright for this scenario. The National Geographic states that by 2050 86% of our oceans will be more acidic and warmer than anything on modern history. As well as this, by 2100 the acidity of our oceans could drop to 7.8 PH (‘power of hydrogen’: the rating used to measure acidity or alkaline) which is more than 150% our current corrosive state.

However, there is a slither of hope. Seaweed, algae and phytoplankton all use photosynthesis to live, a process which absorbs CO2. Harnessing organisms like this as a defence may be a vital asset in resolving these negative impacts. Studies on this, such as in the Californian oyster hatchery, could be an important step in the road to recovery.

Ocean acidification is the process by which increased atmospheric CO2 levels is causing higher rates of chemical reactions in the ocean. These reactions are leading to more acidic waters which in turn implements negative impacts on carbonate dependant marine life as well as other ocean dwelling species.

Scientific dialog that’s bugging you? Comment below or get in touch to be featured on my ‘What on Earth?’ series…

4 Replies to “What on Earth? ‘Ocean Acidification’”